A while ago I wrote about a few problems we were having with the way our issue tracker was misused and concluded that the tools we use have a crucial role in directing our behavior towards good or bad behavior patterns.

One of the major pain points I mentioned was linked to the many duplicate issues we were seeing and listed one possible solution to reduce the number of duplicate issues that were being raised. After reading my post, my friend Mattia came to me saying “Good point, why don’t we just build it?“. Well, we did.

After a few weeks spent coding in our spare time, we released Did you mean?, a Redmine plugin designed to warn users before they enter duplicate issues. It does so by performing a search among existing issues right before users submit new ones. The search is based on the issue subject and it is done in the background, in an attempt to make the process as effortless as possible to users. If you are familiar with StackOverflow, you will recognize it as the same strategy. 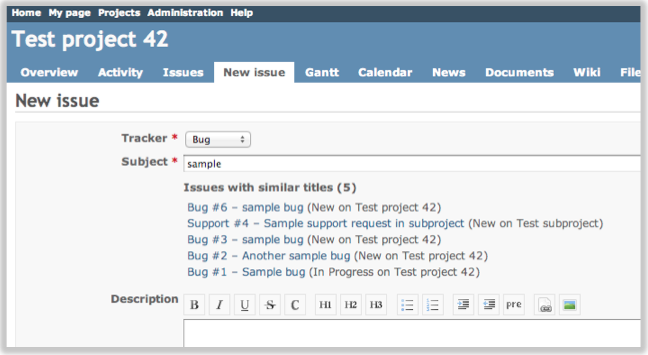 A couple of months have passed since then, but Code52’s initiative Show and Tell made me look in retrospective at what we accomplished.

We discovered that the problems we were facing in managing issues were more common than we imagined. We had great fun in developing the Redmine plugin, but we were surprised when other users started voluntarily contributing with localizations in their language and tips about how to make it better: we just released version [1.1.0][6], which features English, Bulgarian, German, Spanish, Italian, and Chinese.

The experience made us even more enthusiast about Open Source: the saying that you should start by “scratching your own itch” is true indeed. If you build something that really solves your problem, chances are it will be useful to someone else as well.

You can find the plugin on [GitHub][7], and if you want to help us, please do! We could use more localizations and some help in making the search work better.

comments powered by Disqus
Previous
Do languages shape IDEs or IDEs shape languages?
Next
Can we get rid of unknown phone numbers?