A Night Light for the connected home

Several months ago I was looking for a night light when I stumbled upon Zing’s Indiegogo page.

The main feature I was looking for was for the light to activate automatically when I was walking past it and to turn off a few seconds later. Zing seemed to be able to do this and more: after seeing browsing the site, what intrigued me were the many possibilities for customization, the integration with IFTTT and the fact that each light has a temperature sensor — which I was hoping I would eventually be able to access via API.

Some features, such as automatic path lighting and the locator feature, were not a part of the decision. Others, event notification in particular, I knew I would not use (I am trying to minimize the notifications I get while I am home).

I got a pack of 3 on Indiegogo, hoping to receive them relatively soon. The wait turned out to be longer than I expected (shipping ended up being a few months late due to some complications in the production process) but I finally received my lights in October.

So far, I have been quite happy with them. I liked the fact that each light is configurable and offers a number of settings to customize that will help you make sure it works with your environment and preferences.

I installed three lights (two are in bedrooms and a third is in the master bathroom) and set all of them to a warm, yellow glow. I initially configured the bathroom light to a multi-colored rotating pattern (see the screenshot below) but shortly after I opted for a more relaxing solid color and static pattern. 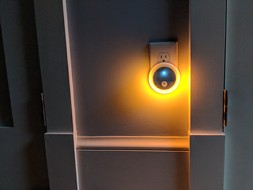 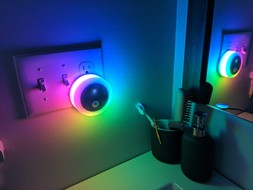 The Zing app allows configuration of many parameters for the lights, such as the light color, intensitiy, spread (influencing how wide of an area the light would illuminate) and speed (for moving patterns).

Unfortunately, the Android app seems to be lagging behind with respect to the iOS one in terms of functionality — more on this later.

The predictive path lighting feature has been quite disappointing so far. Whenever one of the lights turns on (because you are walking past it), all the other two will turn on as well, almost as if the model powering the feature today wasn’t any sophisticated than “if motion is detected, turn on all lights”. Not a big deal, but it meant that I turned off the feature on the light in the other bedroom, since I did not want any of getting up to trigger the light in our daughter’s room.

I haven’t gotten to try neither the locator or the notification feature advertised on Indiegogo: I am not sure whether they are supported or not.

Unfortunately, the version of the lights I received shipped with an older firmware version that is affected by a couple issues:

I must say the latter issue is quite annoying in a night light. If you think about it, having a bright blue LED flash unexpectedly is quite noticeable in a dark room and almost defeats the purpose of having a night light.

I am told that updating the device firmware might help with both of these issues but unfortunately the Android application is unable to perform the update so far. I have been in touch with the Zing Support team to understand what workaround are available (other than procuring an iPhone) and I am hoping to hear back soon.

All considered, I have been quite happy with Zing, provided that I manage to fix the issue with the WiFi module.

The features that I wish it had at this point are all related to software and am hoping they might happen soon:

If you are curious to check Zing out, they now have an official site.

UPDATE (January 2021) I am still quite happy with the basic functionality of these lights. However, I can’t recommend them if you are an Android user.

The Android application to control the lights has not received any updates in years. It also lacks several features that are present on the iOS version, such as controlling the lights based on a schedule, upgrading the device firmware and more.