How long will it take?

When talking about user experience, predictability is good. Some of the things we interact with in our daily life, though, are lacking from this perspective.

Consider traffic lights: they are among the most widely diffused devices and they can’t be simpler. Green: go. Red: don’t.

Yet, they are widely recognized as universal sources of frustration. Red lights, in particular, are able to annoy almost anyone.

And that’s not just because they are inevitably perceived as something meant to slow you down, but also because they leave you almost clueless about when they’ll eventually turn green. (Even if you can make a rough estimate, it will be basically due to the context, rather than to the device itself.)

This is why Sunday I got impressed when I first saw traffic lights like the one in the photo (in Amsterdam). 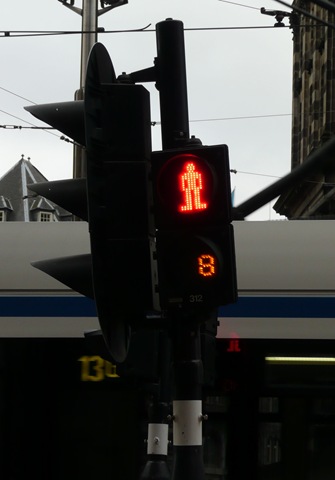 With the addition of countdown displays, pedestrians (involuntary users) know exactly how long they’ll have to wait before they can cross the road. It won’t make the wait any shorter, but will certainly make it much less frustrating.

Similar considerations apply also to other activities/devices (think of queues, public transport, and many others), in particular, with activities which involve waiting. But in case of traffic lights, a simple display can really make a significant difference.

What is more striking, though, is that traffic lights themselves are already being built to be aware of time (how could it work otherwise?). Adding that display just means exposing some meaningful information which is already present inside of them. If you think about that, it sounds so obvious that it’s surprising all traffic lights aren’t built that way.